Out of four boys one would have to be like me. “May the odds be ever in your favor” or “Babies are like a box of chocolates you never know what you’re gonna get”; so in reality it was going to happen. Mr. D the teen, brooding, him against the world, male testosterone meets teen boy, however, he is fiercely loyal and watches out for the little guy.  Mr. T starts public school next year. Socially he struggles, he gets overwhelmed by many people, loves science and will have a robot factory someday, he is currently Mr. Bossy Pants. Mr. B willful, intellectual smart, hot tempered, struggles with getting all of his words out, loves to learn, already working on writing letters and words at three. Then there is Mr. A, sweet, loving, joyful, scary smart, visual, logical, creative, draws shapes and knows colors, problem solves, is curious, has a sassy pants temper, gets hangry, oh yeah he is so much my little me in male form.

Mr. A is independent, he is the most self-sufficient of all my boys, can entertain himself, can figure it out, and loves to see cause and effect. He was born two months early and spent the first three weeks of his life in the NICU. He knew how to self-pacify right off the bat. He hates limitations, can be willful, and will figure it out in his own way because he is impatient. Sigh…I am reading about myself too. I digress. He reached two recently and with that came a whole new meaning to curiosity, what if’s, how come, what happen’s when?

Today he decided to play CSI with his Lego’s and his drink. What happen’s if I pour my drink in each of the holes in the Lego’s, then dump those into the big bored upside down. I guess he was trying to see how many holes he could fill with each sized Lego. Apparently he has been doing this for some time and I finally found the sour smell in his room under his bed. Flashback to me as a kid growing science experiments under my bed. SO sorry Mom. Needless to say today we made Lego soup in the sink. The water was disgusting = I have more deep cleaning and exploring in his room to do.

Look I cannot stand there staring at my kids all day long waiting for them to do something wrong; that is like watching a pot waiting for it to boil. Instead I have to get on with my day and come back ninja mom style and say “What did you do?” and watch them jump like Rosie McRose Rose. Sigh, just another day down in the books. 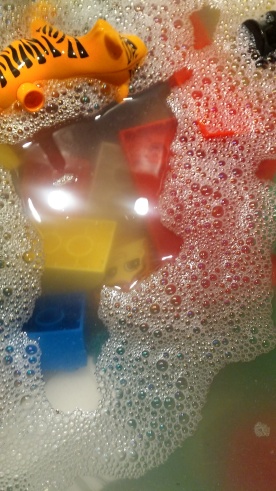 reminds me of the swamp scene in the Lord of the Rings: The Two Towers

Lilly and the Gang is a little space to share life, creativity, and to learn together.